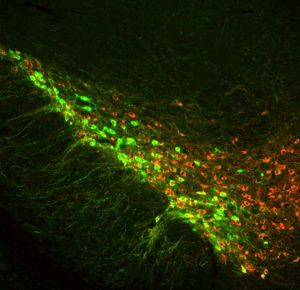 Many brain nuclei can be further subdivided into smaller neuronal subsets with specific molecular signatures and functions. For example, the midbrain dopamine system is composed of the ventral tegmental area (VTA) and the substantia nigra (SN). Both parts have different functions and are differentially affected in disease (SN neurons die in Parkinson disease patients). However, even within the VTA and SN smaller neuronal subsets exist. We are currently setting up subtractive genetics strategies in mice to genetically label, purify, activate or ablate functionally similar subsets of neurons in the dopamine system and other parts of the nervous system. In the past, we have identified many aspects of dopaminergic pathway development (e.g. rosto-caudal extension, axonal orientation, fasciculation). This new approach will help us to study novel aspects of dopaminergic pathway development such as axonal pruning, topographic bundle organization and axonal sorting. This work is in part supported by Stichting ParkinsonFonds.